If there is something wrong with your fish; they look ill or are dying, or there are water quality problems, we strongly advise that you test your aquarium water.

What is the Nitrogen Cycle?

Before adding fish to your aquarium there are some important things you need to understand about how the aquarium water remains clean and healthy enough for fish to live in.

The short video below talks you through this process, or read on for more.

The breakdown of fish waste; too much food and dead plant matter will cause toxic compounds – namely ammonia – to build up in the water and kill your fish. As an aquarium is a ‘closed’ environment it means harmful waste can build up quickly because there is not enough water to dilute it or to wash it away, as would be in a pond or river. Thankfully, there is a natural process called the ‘Nitrogen Cycle’, which we can recreate in the aquarium, to convert the toxic waste into safer compounds (The image below explains how this process works). 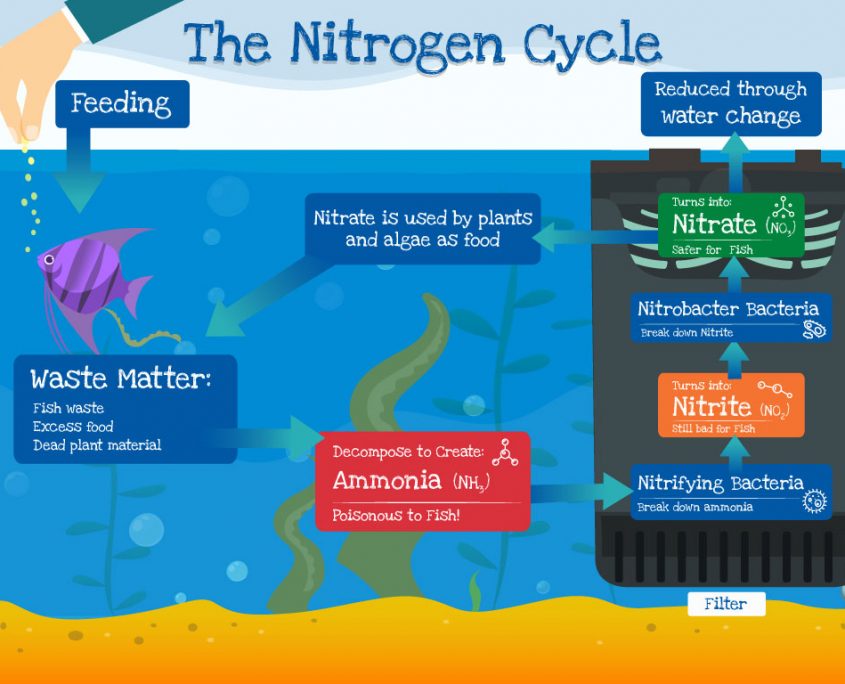 This Nitrogen Cycle is carried out by ‘Nitrifying’ bacteria that establish in the biological media of the aquarium filter. These bacteria generally take about eight weeks to grow and reproduce in the filter to large enough quantities to carry out their role in the Nitrogen Cycle.
During this early period, when there are few bacteria, fish keepers often experience fish deaths caused by the build-up of invisible toxic compounds: this is referred to as ‘New tank syndrome’.

Will my fish survive winter if the pond freezes?